Gilabbey Veterinary Hospital, let our dog fall on his head 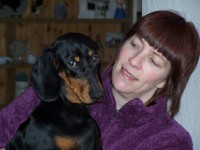 Danno was born in our kitchen on the 03rd of August 2008 and the first and last voices he ever heard was ours, his life was brought to an abrupt end on the 09th May this year due to the negligence at one of Ireland’s leading veterinary practices, Gilabbey Veterinary Hospital in Cork.

Events leading to Danno being Put To Sleep

On Monday 23rd November 2015 we attended Gilabbey Veterinary Hospital for the first time after being referred by our vet. The cause was that Danno our Male Standard Smooth Dachshund had symptoms of spinal injury. At this consultation Shane Guerin examined Danno and gave us a detailed explanation as to what was actually happening. The surgery to be performed on Danno was Thoracolumbar Hemi-laminectomy (Spinal Surgery) and the decision to carry out this procedure is based on what symptoms are present on a scale of one to six. One being the dog feeling pain and six meaning the dog was paralysed and incontinent. Danno was at a stage three when we arrived which meant that he had feelings in his back legs, and that after a successful operation and rehab Danno would have a 90% chance of making a full recovery.

We have never had insurance on any of our dogs, but make a commitment to them that once they enter our home we will take care of their needs completely. The operation was carried out on the afternoon of Monday the 23rd of November and on Wednesday the 24th we got a phone call to advise that Danno had toileted by himself and we could collect him the following day. When we collected him we were given a set of exercises that we would have to get Danno to perform and instructions to keep him confined to a crate for 8 weeks except when feeding and toilet breaks. When bringing him outside he would have a harness over his front quarters and a specially made one for his rear. We had travel plans booked and pre paid during this 8 week period which we cancelled in order to care for Danno during his rehab.

Danno’s rehab which included four land / water based physio sessions was text book and he was requiring less support every day from the rear harness.

Danno continued to make a great progress and was at least 95% fully recovered.

On Saturday 7th May 2016 at approx 2230 hrs whilst out for his last toilet break of the day, Danno sat down on his hind legs and we instantly knew that there was a problem. We set up a crate in our bedroom and he slept in same the whole night without any incidents. On Sunday the 8th May at approx 0830 hrs we took Danno from the crate and instantly knew that he hadn’t got full power in his back legs. I called the Gilabbey Veterinary Hospital main phone line and the message on the answering machine advised the mobile telephone number for the emergency service. I called this number and spoke to Gemma O’Donoghue the covering vet, and advised who I was and our history with the hospital and that I suspected that Danno was having another ruptured disc. Gemma advised that the fee for an out of hours consultation was Euro 135.00 and after I advised this wasn’t a problem agreed on meeting her at Gilabbey Veterinary Hospital at 1030 hrs. We arrived at approx 1045 hrs and the front or was locked. We called Gemma on the mobile number and she came to unlock the door and let us in. We followed her to an examination room where she carried out a series of tests on Danno and came to the conclusion that as he had feeling in his back feet, brought on by squeezing same with a forceps that he was at a stage 3 and that surgery would be an option. We signed a consent form and left the estimate blank. We were advised that Danno would be constantly monitored and it was unlikely that he would deteriorate. We brought him through to an observation room and placed him in a crate. Before we left we paid Gemma the Euro 135.00 for the out of hours service.

On Monday morning 9th May at 0905 hrs we called the Gilabbey Veterinary Hospital main line number and asked to speak to Shane Guerin. When we spoke to Shane Guerin he advised that he had received a text from Gemma on Sunday to inform him that Danno had been admitted but at this stage hadn’t seen him, but based on him still being at a stage three, he would operate on him that afternoon. I advised that we were heading from West Cork back to Midleton and would call in on the way through to get an update but would be on the other end of the phone if needed. At 1001 hrs I received a call from Shane Guerin to advise that Danno had deteriorated and was now at stage six. I advised that we were en route and would make any decisions once we had seen our dog.

When we arrived into the reception in a distressed state Valerie came from the reception and led us to consultation room 4 and advised she would bring our dog down to us. We stood at the door and Valerie advised that “She” was coming down now, and at the same time the doors of the observation room opened and a large female collie dog was being wheeled down to us. We informed them that this wasn’t our dog, and the three staff looked at each other then wheeled this dog away. We then asked Valerie where our Danno was as we wanted to see him and she led us back to the observation room. Josephine & I spotted Danno on the ground tethered by a lead around his neck in a very distressed state. When we got to him we were utterly shocked at what we saw. Shane Guerin was present in the room, and was writing some information on a white board whilst being filmed by a camera crew. The whites of Danno’s eyes were completely red, blood red and he had a swollen lip on his left hand side. I checked Danno’s lip and also checked inside his mouth to see if any of his teeth were broken, as I knew that he had sustained some kind of injury that could have easily resulted in a broken tooth / teeth. At this stage Shane Guerin came over to us and we asked what happened to Danno & he advised that “he had a little fall” and asked could we go to a separate room to discuss the same. When in this room Shane Guerin advised that Danno was now at a stage six and that now the odds of him making any recovery after an operation would only be 20%. We asked what quality of life would Danno have if left like this and Shane Guerin advised “None” Josephine asked Shane Guerin if the fall had resulted in Danno going from a stage 3 to a stage 6 and Shane said “I don’t think so” Left with no option we had to make the heartbreaking decision to put Danno to sleep.

We spent about 45 minutes with Danno before this procedure was carried out .

We both left with Danno wrapped in a blanket via the back door as we didn’t want to go back via reception. Josephine then went to settle our bill which came to Euro 270.01 including the cost of having Danno put to sleep.

On Tuesday the 10th May at 1034 hrs we called the Gilabbey Veterinary Hospital looking to speak to Shane Guerin and was advised that he was in surgery but would call me back when out of same. At 1043 hrs I missed a call from Shane Guerin’s mobile as I was on another call. At 1138 hrs Shane called again and we had a discussion where I advised that I wasn’t happy with what had happened the day before. Shane Guerin advised that he had been thinking about it and had intended on ringing me that day to talk about same. I asked Shane Guerin in his opinion had the fall that Danno sustained contributed to him going from a stage 3 to a stage 6 and he advised “It probably did” and that he took full responsibility for what had happened. We advised that we had a lot of questions that required answers to and he suggested a meeting.

This is what we discovered: END_OF_DOCUMENT_TOKEN_TO_BE_REPLACED