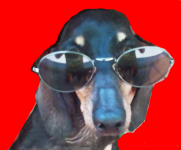 I’m writing to you as a last resort.

I’m so close to going out of my mind & if that happens I’m not sure what I might do to myself.

The thing is, I was bred to work but it’s not the downturn in the economy that has affected me.

It hasn’t always been this way as I don’t mind saying it but I was the most beautiful pup you could lay two eyes one. In fact it was my eyes that made me look so spectacular. They are ice blue.

In a way it was my good looks that have landed me in the dire predicament that I currently find myself in. You see I was such a gorgeous pup that the first person that came to visit me and my siblings with my mother, snapped me up and couldn’t wait to show me off to their family & friends. It seemed a very slick transaction as I don’t recall too many questions being asked of the new humans about what set up they were bringing me to. Did they work all day ? Were there children in the house & if so would they have enough time to dedicate to my basic requirements? The cash just changed hands & I was on my way.

The first few weeks were great. I was like a magnet for humans as all shapes & sizes were drawn to me & I hardly had a minute to catch up on my well needed rest. If they weren’t playing with me they put a noose around my neck & took me for expeditions that quite frankly left me exhausted. It was like my humans wanted every possible opportunity to show me off.

Then it all changed.

I was cast out of the warm kitchen & comfy bed into a compound at the very end of the garden with a wooden structure with a blanket in it. That in itself wasn’t that bad & I quite enjoyed the outdoors. I think it’s in my genes, something to do with pulling sleds across artic tundra, but I think I’m so far down the garden my humans must forget I’m there most of the time. They haven’t put the noose around my neck for what seems like a lifetime in itself.

My days are long they seem to endlessly stretch out ahead of me. To amuse myself I often dig a lot and I chew away at the chain link on my small run so I can explore the outside world. I am curious to find is there more out there and not just the space I exist in ! At night time I often howl much to the annoyance of my humans & their neighbours but I am just letting them know that I am still down here. The more I howl & dig, the more I seem to distance myself from my humans, as the seldom time they do pay me a visit they always seem to be annoyed with me & look at me with distain.

I long to go out for walks and spend time playing with mine and other humans as well as other dogs but I think the chances of this happening are as slim as snow in august.

My ice blue eyes are now deep pools of depression & I wish this suffering would just end as I‘ve heard that once you cross the rainbow bridge the suffering you might have endured in this world disappears. Is it wrong to have these thoughts ?

I’m sorry for dumping all of this on you Doris as I think I’m a hopeless case, but wanted to send it to you before I took matters into my own hands.

I enclose a picture that probably sums up my situation a lot better than I have described it above.

Yours, for the moment 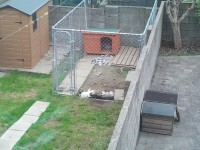 I must say that this is the hardest Dear Doris that I have had to respond to.

Your email really tugged at my heart strings.

The first thing I am going to say to you Ice is that the situation you find yourself in is through no fault of your own and bears no reflection on you as a fellow canine.

Secondly what I would say to you is that you are not the only Siberian Husky or other relative that has found themselves in this situation. You are not alone.

Humans consider themselves to be masters of the animal kingdom but unfortunately as you well know some are yet to master the skills to become a responsible owner of a canine.

Why oh why did your humans not research your breed sufficiently before being sucked in by your ice blue eyes ?

Why oh why did the owner of your mother sell you on to the first person that fell in love with your ice blue eyes and had the asking price in cash waving in one hand ?

Did they not realise that when your breed was first developed by humans that your purpose was to pull sleds on arctic expeditions to the frozen extremities of this planet ?

The traits that were required in your ancestors are well and truly still alive in the adult dog that you have grown into.

Although the weather in Ireland is sometimes extreme I doubt somehow that you will get to exhibit your talents as a sled dog, but having the ability to do the same, should give your humans some idea as to the exercise you require in order to keep you stimulated both mentally & physically. It’s the lack of these basic requirements that has you howling at night, digging and chewing at the wire that keeps you a prisoner. It should be you looking at them with distain through your ice blue eyes.

It’s a fact that most dogs are over exercised as pups and under exercised as adults. I think you can vouch for this as you were dragged from pillar to post as a pup, shown off as some kind of status symbol, but once you matured and were developed enough to take some serious exercise, your owners had lost interest & looked on with misguided & unwarranted distain in their eyes.

Now here comes the reality of the situation and I’m going to be frank Ice, I can’t see your situation improving much with your current owners.

In the event that they finally admit that they went about things the wrong way before making what should have been a lifelong commitment to you, we have advised them that the All Ireland Siberian Husky Club  like many dog breed clubs in Ireland run a fantastic rescue & will be able to assist them in helping them find a suitable and permanent home for you, with humans that understand what you require to lead a fulfilled life that will bring so much joy to theirs.

I truly hope that your current situation will improve and you get to lead the life that you deserve.

One response to “A picture paints a thousand words”