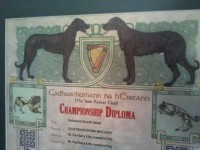 There are hundreds of thousands of dogs in Ireland, yet only approx 1500 of these attend at any individual dog show affiliated by the IKC.

Let’s guestimate that 1000 of these litters were from show kennels, that’s 4000 litters registered by people not involved in the show dog scene.

So the question might be what are show dog people and the governing bodies doing in relation to assisting and educating all the other dog owning / loving people out there ?

Now some show dogs have it and others just don’t – It’s true that some dogs really come alive when in the show ring, and it looks like this is their true vocation, but time spent in the actual show ring for most dogs accounts for approx 5 minutes out of the whole dog show day. The rest can be spent crated in the back of a van, car or trailer for periods from 10 minutes to 10 hours, not to mention the time spent on grooming tables or crated ring side.

Given the choice, and remember it’s us that makes our dogs choices, I am sure most dogs given the opportunity of attending a dog show, or free running in a large field, park, woodland or beech, most would chose one of the later. If I were a dog, I certainly would.

Showing dogs why do people get involved?

It’s a hobby that you can share with your four legged friend.

It’s a good way to meet other like minded people interested in the same breed as your own, and learn about all the different types of dog breeds.

It’s a great chance to learn more about your breed from some of the top people in the country, some of which have spent their entire lives with this breed.

It’s a good way to meet some nice people,

And it’s nice to see how your dog compares to others within it’s breed.

What dog showing and some people in the “Sport” have become

For some it’s no longer a hobby to be enjoyed with like minded people, now It’s a sport, and IMO the difference between a hobby & sport is the competitive nature.

It’s granted there are some really genuine people in all dog breeds, people with a true love of the breed at heart, but unfortunately they seem to be becoming the minority.

This minority of people promote their breed at any given occasion, and not just to other show kennels but anybody with even half an interest in their breed, or even a different breed completely.

This minority of people say that a dog is for life, and once brought into the family the dog gets to live out it’s life with the family, but how many show champions or older “Stock” or possibly dogs that don’t make the grade get moved on to make way for a new puppy or recruit.

How many people stick with the breed that they fell in love with all those years ago, but suddenly drop them like a hot stone as soon as the competition heats up, only to reappear in another “rare” breed, where the numbers of competitors is numerically weak.

But even in these numerically weaker breeds the bickering and backstabbing amongst exhibitors is plastered all over Facebook for us all to see. It’s painful and pitiful to see such genuine hatred between people that share the same love for a certain breed of dog…Where did it all go wrong ?

It is true you do meet some nice people and make a few real friends and hundreds if not thousands of facebook friends. On the other side of this coin you also meet some very nasty people, and encounter lots of keyboard warriors, and ones that should be working for the top PR companies in the land, as if they could promote a brand or company half as well as they do their dogs or Kennel on Facebook etc, their future would be secure.

Who cares if your dog was the Annual Champion, or current top of the leader board with some over priced dog food company or dog magazine, it’s not worth getting into arguments or slagging matches on Facebook, trust me, your dog doesn’t give a shit !

All of the above takes place in order to obtain the holy grail, 7 Green Stars, so that your dog can be crowned an Irish Champion. An award that’s presented by The Irish Kennel Club. The governing body for pedigree dogs in Ireland. A governing body that a lot of people that attend these dog shows, say could do so much more in relation to dog welfare in this country. One suggestion is that they should only be registering pups that are a result of health tested parents etc, not to mention not registering litters from people with any amount of the must have breeds, that change as quickly as the weather. Back in 2010 The Kennel Club in it’s Mission Statement stated that it would promote the health and welfare of all dogs.

So if you are in the group of people that think the Irish Kennel Club could be doing so much more in relation to dog welfare etc, what is the Green Star or Championship Diploma really worth to you and along with Annual Champion etc, are they really worth getting your knickers in a twist over?

One response to “Showing Dogs – Where did it all go wrong ?”