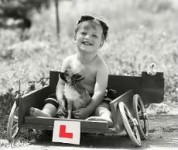 Following on from last weeks announcement from the Minister for Agriculture Simon Coveney that he plans to introduce mandatory micro-chipping for all dogs, in an EXCLUSIVE online interview with Pedigreedogs.ie “the registered web site for dogs in Ireland” his next step will be to introduce a test that will have to be passed by all prospective dog owners.

However unlike the date provisionally given for mandatory microchipping of 2016/2017 in line with the UK, the new test that anybody considering getting a dog will have to pass, will be introduced on the first of January 2014.

“It makes complete sense” said the Minster, comparing dog ownership to being responsible for a motorised vehicle, and that “in both cases you should have a complete knowledge of what is required”

Pressure to introduce such a test was placed on the minster by concerned dog welfare groups, as a result of the well publicised cases of dog abuse, and dog abandonment that has reached a crisis point.

A spokesperson for one of the welfare groups who we contacted after our exclusive interview with the Minister, who wished to remain anonymous stated that they were delighted that the minster has listened to them and is finally “getting the finger out” in relation to promoting responsible dog ownership.

The test which is currently being drafted by the Dept.Of Agriculture in conjunction with some of the dog welfare organisations will entail a combination of both practical and theory tests.

The Minister advised that applicants for the test will have to be be aged 18 and over, and although it’s still in it’s early draft stages, the theory will be based on a multiple choice system, for example:

Q: What is considered to be the right way to go about becoming a dog owner ?

A: Buy a dog from a Pet Store

B: Meet somebody on a bypass and pay for a pup from the boot of a car

C: Research the breed, speak to several breeders, meet some of the breeders at their facility & then put your name on a puppy waiting list or with your local dog pound.

D: Buy it on impulse from somebody selling dogs at one of Ireland’s country fairs

“Once the prospective dog owner has reached the required pass rate for the theory test” the Minister said “they will then have to undergo the practical test, which will involve a dog walk with a dog that through no fault of it’s own happens to be in one of the country’s overflowing pounds, which in the majority of cases is a result of irresponsible dog owners.”

On completion of the dog walk, successful candidates will be issued with a responsible dog ownership license, which when drafted into law, will have to be produced by any person wishing to buy or rescue a dog in Ireland. The cost for this license has yet to be finalised.

We here at Pedigreedogs.ie are delighted to be in a position to bring you this great news from the Minister and his dept. and as always are on hand to assist in any dog related matter, where we constantly strive to get our message across about responsible dog ownership.

We would also encourage anybody that is considering becoming an owner of a dog in the near or distant future, to visit the Dog Breed Village at this years Pet Expo which is being held at the RDS Dublin on the 16th & 17th November where you can meet and greet with 45+ of Ireland’s top breed specialists who will be on hand not only to give you advice about their beloved breed, but any breed of dog, and responsible dog ownership in general.