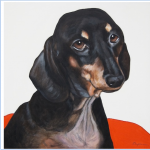 It was with great sadness that we had to say goodbye to our beloved Doris on the 30th September last year.

We had 13 wonderful years with Doris and she brought us tremendous happiness, we will never forget her !

We very rarely had to bring Doris to the vets but unfortunately in April 2011 she had a few symptoms that caused us concern. She had started to drink a lot of water and would often shiver despite being in a warm house.

We brought her straight to the vets and after taking some bloods and doing tests he diagnosed Doris as a diabetic, she was 9 years old. We were both devastated upon hearing this news as we knew a little bit about diabetes in humans but we knew nothing about it in dogs, but this would soon change.

The vet explained to us what we would have to do on a daily basis to care for our diabetic dog but it was all too much to take in at the time and it took us a while to get our head around things.

Doris now had a disease, she would never be cured, her disease could only be controlled and even that would be very difficult to do at times, as we experienced over the next three and a half years. It all seemed very daunting to us both but like everything we do with our dogs we threw ourselves into the task ahead 100% and we started to educate ourselves on how to care for Doris the best we possibly could. Taking on the care of a diabetic dog is a huge task and luckily there were 2 of us involved and our current circumstances allowed us to care for Doris.

What was involved in caring for Doris ?

* Twice daily injections – we injected Doris twice a day as this worked better for her in helping to control her sugar levels but every dog is different, you need to get this balance right with close supervision from your vet.

* She was fed twice a day at exactly the same time as this was very important, feeding at irregular times will totally mess up the sugar levels and will make your dog sick.

* Food portions were the same size at each meal every day but we did not always get this right and as a result we found if we increased the size portions it would affect her sugar levels.

* A diabetic dog is constantly hungry and this is part of the condition, but as a rule we did stick to our routine as we knew it was the only way.

* Insulin was administered shortly after Doris had her daily meals, it is best that your dogs has eaten it’s meal before giving insulin as it is not good to give insulin on an empty stomach.

* Blood Glucose Monitor: We bought an Acu Check blood glucose monitor (the same one used for humans) so we could check Doris’ sugar levels on a regular basis. We would then record the readings on an excel spreadsheet. Blood was drawn from the inside of the lip. A task that took both of us. One to hold Doris and one to draw & measure the blood. Doris never minded getting this done, as we would treat afterwards with broccoli etc.

People often think only overweight dogs can get diabetes, this is not always the case. Doris was the perfect weight but diabetes is common in older female dogs especially neutered ones. In humans diet is very important in maintaining a good blood sugar level, so we assumed the same must be the same for canines.

The first thing we did was visit a Mr Tom Farrington in West Cork as we had heard that he had great success in treating diabetic dogs and even curing diabetic cats. He advised that the raw food diet worked very well in helping to control the sugar levels in diabetic dogs. We switched all of our dogs onto this natural diet of raw chicken and raw vegetables and we never looked back !.

The only vegetable that we did not feed to Doris was carrots because of their high sugar content. This diet worked very well for Doris because there was no sugar in it, we would also take the skin off of any chicken because of the high fat content in same.

* Increased thirst – when Doris’ levels went up she would start to drink more water than normal, this was always the first warning sign for us.

* Increased gunk in her eyes this was always a sign that her sugars had gone high, when her eyes were clear we knew the levels were fairly okay.

* Other factors such as stress can contribute to high levels

* If we got a series of high levels over a few days we would then adjust the dosage by speaking to our vet , we would then keep a close eye on same by taking more frequent sugar levels until we got it to an acceptable level.

Low sugar levels what were the warning signs -Lows occur when your dog is getting too much insulin so the levels have to be carefully monitored and reduced over time.

Lows are much more dangerous than a high and if left un-noticed your dog can go into a coma but thankfully we were always there to notice the symptoms.

With Doris we always noticed that some of the above symptoms would occur when her levels had gone to low, this would normally occur when the insulin was working at its peak usually around 4 -5 hours after Doris was fed. She would have no energy and would be very weak and if placed off the sofa onto the floor would stagger , a low level for Doris was under a reading of 4 mmol/l on the blood glucose monitor.

When this occurred it was very important that she got a sugar fix to bring up the sugar levels. We would do this by administering some honey onto her gums and giving a very small amount of food finely cut up as dogs with low levels can find it hard to swallow. Within half an hour Doris would come around and she would be fine again but it was always a very worrying experience but we learned what to look out for over time and thankfully it very rarely happened .

As I said before every dog and their diabetic condition is different but there are definitely some common factors that are common and are easy to look out for.

Storage of insulin : Owner error is actually the most common cause of what is thought to be insulin resistance.

This may seem basic but it is important not to skip the basics. Confirm that the amount of insulin being drawn into the insulin syringe is correct, that the injection technique is correct and that the patient is actually receiving the injection. Rule out any snacking or changes in the patient’s feeding schedule. Be sure the bottle of insulin is not expired and that it has been properly stored. Your vet will show you how to administer the insulin correctly and you can also watch you tube clips on the internet. We also found that by giving the insulin in different areas helped an awful lot instead of putting it in the one point each time, we would rotate sides at
each meal.

Yes taking on the care of a diabetic dog is a daunting task and not everyone is in a position to give this much care to their beloved pet due to their personal circumstances and we would not criticise them for this. We are so glad that we were able to care for Doris and help her lead a good life up until the very end, it was tough work but she gave us so much in return it was worth it. Diabetes is a minefield even in humans and even our vets find it very difficult to understand.

If any of you out there are going through a similar experience and would just like to make contact to discuss our situation we would love to hear from you, please email [email protected]