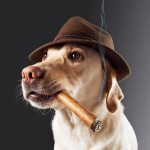 Coming hot on the heels of the Animal Health and Welfare Act 2013 Mr Simon Coveney TD, Minister for Agriculture, has leaked details of his latest plan to a fan of Pedigreedogs.ie that in turn gave us the exclusive on this piece of news.

Now I’m not sure if you heard or read about the latest piece of legislation where it is planned to ban smoking in cars where children are present that Minister for Health James Reilly hopes to have ready in the next few weeks.

It now seems that Simon Coveny wants to make a slight amendment to the recent Animal Health and Welfare Act and introduce this piece of legislation so that it will also be against the law to smoke in a vehicle if an animal is present at the time.

He stated that Nobody has the right to harm an animal & that gardaí would be called upon to enforce the law but it was also up to the animal loving people of Ireland to apply “peer pressure” so that the ban once introduced is also enforced.

Pet insurance companies have welcomed this latest piece of news and are confident that if enforced it “may” contribute to lower premiums going forward.

The Animal Health and Welfare Act 2013 replaces Protection of Animals Act 1911 and the bill with this additional amendment is to apply across the board, to both rural and urban areas and to all animals domestic & commercial .